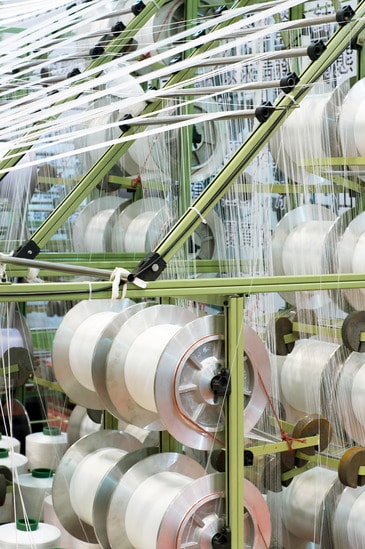 Historians believe that textiles date as far back as the Paleolithic Era. For many of the ensuing centuries, wool was the raw material of choice until cotton became more widely cultivated and could easily be turned into cloth. Textile production was labor intensive and workers engaged in it on a small scale. A weaver’s cottage might be found in many villages throughout Europe where cloth was produced for clothing and other uses in the local area.

Eventually, production techniques improved, and a growing number of weavers began to be able to export their wares. It wasn’t until the 18th century Industrial Revolution that large-scale textile operations began taking shape. Key inventions like John Kay’s flying shuttle, James Watt’s steam engine and the spinning jenny of James Hargreaves are all credited with helping to modernize and expand the textile industry in England. Unfortunately, some inventors, such as Hargreaves, failed to protect their inventions. This left them open to duplication, and the inventors were frequently not compensated for their ingenuity.

The 19th century brought more mechanization with a greater variety of steam-driven machines. England wasn’t the only place where the textile industry was flourishing. American mills were becoming increasingly prominent, and this included many such organizations in Texas. In fact, James Bowie was the first Texan to propose the establishment of a cotton mill in the region back in 1830. Later frontrunners of the industry in Texas followed in 1845 and 1850. Texas mills began to process both cotton and wool textiles for the next several decades. Eventually, mills in the state would be able to supply material to over 700 manufacturers around the world. El Paso and Dallas remain centers of textile production to this day.

People and businesses with an interest in the textile industry are making innovative advances today. Many of these inventions can and should be protected by various forms of intellectual property. Whether it is a revolutionary new fabric or an advanced method for producing textiles, it is certainly worth exploring obtaining patent, trademark or copyright protection.

An inventor who creates a new weaving machine or an improvement on an existing sewing machine or loom may be interested in obtaining a patent. Such protection entitles the owner of the patent to a period of approximately 20 years during which they may prevent others from using their innovation without permission.

Formulations for dyes may require similar protection. Back in 1865, an inventor came up with a chemical formulation for mauve fabric dye. He received a patent the same year. Anyone who develops a new synthetic fiber may also look into patent protection. Trademark registration may also make sense. Modern fibers like GoreTex and Lycra have received trademark registrations, which entitles the owners of these registrations to exclusively produce these textiles for as long as they maintain the registration and continue to use the fabric. Copyright registration may also be appropriate for certain fabric designs as long as they are original and nonfunctional. Copyrights have a very long term, providing an opportunity for several decades of exclusive use.

Schedule a Free consultation with Texas intellectual property attorney Jeff Williams to learn more about protecting inventions relating to the textile industry. His knowledge and experience with obtaining patent, trademark and copyright protection for textiles makes him the ideal advocate to work for you.