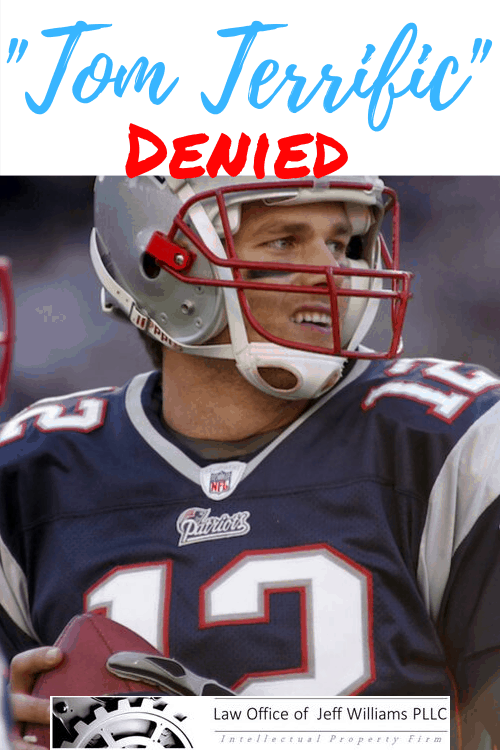 Trademark registrations are among the most commonly pursued intellectual property rights in the U.S., yet it can be surprising just how little understood these protections are. It’s not unusual for the average person to believe that once a word or phrase is registered as a trademark, it is somehow illegal for anyone other than the rightful owner to use the mark.

However, this isn’t quite the case, as football legend Tom Brady recently learned. Brady and his legal team from TEB Capital Management filed two trademark applications with the U.S. Patent and Trademark Office earlier this year trying to protect the “TOM TERRIFIC” mark.

Both applications stated that Brady and his team had an intent to use the mark in interstate commerce for goods such as T-shirts, printed photographs, posters and trading cards. An unintended public furor erupted as longtime fans of Tom Seaver, a baseball pitcher in the Hall of Fame, protested that the “Tom Terrific” moniker really belonged to him.

It seems that the USPTO was in agreement with the public on this one. They denied Brady’s applications based on the fact that the “TOM TERRIFIC” name was already closely associated with Seaver and had been for decades. Officials at the USPTO believed that if Brady were to introduce a line of goods associated with the TOM TERRIFIC mark that consumers would be confused as to whether the mark referred to Brady or Seaver.

However, in view of Brady’s remarks in response to the furor, it appears that he didn’t understand U.S. trademark law in the first place. It seems that the reason that Brady filed the trademark applications was to prevent others from using the moniker in connection with him because he doesn’t like it.

In other words, Brady filed the trademark applications, stating under penalty of perjury that he and his company intended to use the marks in interstate commerce in connection with the identified goods, when he actually had no intention of doing so. Brady may have simply been annoyed when his team and people on social media referred to him as “Tom Terrific.” Seeking to stop such use, he had his legal and business team file trademark applications.

Unfortunately for Brady, that’s just not how trademark law works. The only way to obtain a federal trademark registration in the U.S. is by using the mark in interstate commerce and then demonstrating that use to the USPTO. If Brady never had a bona fide intent to use the mark in interstate commerce but instead wanted to prevent others from using a certain name, how could he ever expect to obtain a registration?

The answer may be that Brady did not consult with intellectual property attorneys before filing his applications. Intellectual property is a specific area of the law that not every lawyer is qualified to practice. Without focused education, training and experience, attorneys are not prepared to guide their clients through the process of obtaining a U.S. trademark.

Consulting with a trademark attorney would have saved Brady a great deal of time, money and embarrassment. Anyone interested in obtaining a federal registration of a trademark is encouraged to consult with an intellectual property attorney.