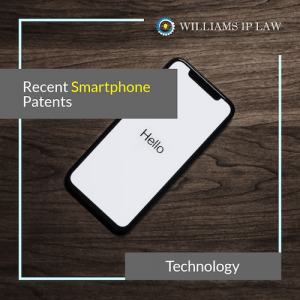 Smartphone technology moves at the speed of light. This means that manufacturers are continually pursuing patent protection for their new tech in jurisdictions around the world. While many of these technological innovations won’t show up on smartphones for years, others may be available the next time you are ready for an upgrade.

Here’s a look at some of the latest tech patents that are being pursued around the world by smartphone manufacturers.

Notched smartphone displays were introduced a couple of years ago, primarily being seen on the Apple iPhone X and the iPhone XS. A smartphone that has a notched display doesn’t have a regularly shaped rectangular screen. Instead, there is a cutout somewhere in the design.

That cutout may house any number of different components such a front-facing camera, speakers or sensors. Manufacturers may choose to include a notched display on a smartphone to achieve a more attractive screen-to-body ratio, to make the overall phone smaller or to provide more screen space.

Currently, Samsung is pursuing a design patent application in Korea for a smartphone display with a reverse notch. The disclosure says that Samsung is seeking to maximize the screen size, which means that the notch is placed above a full-size display. Accordingly, “a display panel [is] attached to the back of the cover window used in a smartphone. The cover window includes a protruding portion at the top center …”.

This doesn’t sound like a particularly practical solution, so we’ll see if it ever hits the marketplace.

When Samsung innovated the punch-hole, front-facing camera on their Galaxy S10 series, it was ground-breaking technology. Today, it’s old news. Samsung plans to drop the feature on its new phones, and ZTE is seeking patent protection for a means of masking the black dot on the home screen so that users can have maximum screen space.

The new tech moves the camera to a high corner of the screen so that it aligns with notification icons. It looks like it’s just part of that row, placed next to the battery icon. The ultimate goal is to eliminate as much of the smartphone bezel as possible. This is just one more way to get the job done.

In an effort to do away with the need for a pop-up mechanism or a display cutout to be used with a front-facing camera, a new patent has been obtained in China by Xiaomi. In the patent’s disclosure, the invention would involve a pair of cameras placed under the display.

Once again, this helps to maximize the screen-to-body ratio. The camera operates through the transparent display, with the only real downside being that the display can interfere with image quality. In other words, this technology is definitely still under development. While it may appear on some of the latest mid- and low-range smartphone models, it’s unlikely to appear on the higher-end phones until some of the kinks have been worked out.

Anxious to get back into the smartphone game, Microsoft is pursuing patent protection for an improved battery-life meter. According to the disclosure, the improvements are directed toward providing users with more comprehensive data concerning how much battery life is remaining. This means that the smartphone could not only measure the battery level but also provide usage times based on a variety of scenarios so that people can maximize the remaining battery life.

If you’re interested in pursuing patent protection for any type of technology, then contact Williams IP Law to schedule a free consultation.