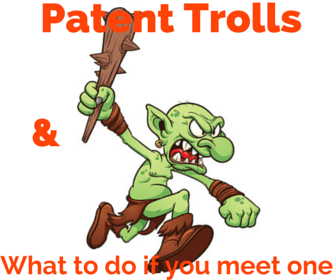 What Are Patent Trolls?

Patent trolls are a lot like the threatening creatures from fairy tales that guard bridges and demand a high price for access. Rather than trying to develop or market a useful new product or process patent trolls try to earn a profit by accusing others of infringement. Their efforts tie up the U.S. court system with frivolous litigation, stifle innovation and put many small companies and individuals out of business.

A patent provides the owner with the right to prevent others from making, selling or offering for sale the invention described in the patent. Should an individual or company infringe that patent the patent owner has the right to demand that the infringer cease that activity. This can include threatening to file a lawsuit or actually moving forward with filing. Litigation is expensive and risky. Many companies accused of infringement are anxious to settle with the patent holder as long as it keeps them from going to trial. There are various means of settlement. The patent owner may agree to license the patent to the infringer. The infringer may also agree to cease the infringing activity, and may pay an agreed-upon amount to make up for lost sales of the patent holder.

Knowing that Texas companies and individuals accused of infringement are typically willing to avoid litigation at all costs, patent trolls make it their business to routinely accuse others of infringement. They pick up patent rights not through innovation and hard work, but by purchasing patent rights from owners who are having difficulty monetizing their invention. The owner agrees to sell the patent to the troll in a last ditch effort to capitalize on their invention. Now that the patent troll owns the patent they are free to aggressively seek out anyone who might be infringing that patent.

It’s never pleasant to receive a threatening letter that suggests patent infringement and the possibility of a lawsuit. In fact, it often leads the recipient to panic. They might consider ignoring the letter or anxiety may push them to immediately capitulate to the patent troll’s demands. The better option is to remain calm and do a little research. An Internet search may reveal that the party behind the lawsuit is an entity known as a patent holding company or patent assertion entity. By looking at public court records and other documents, it should be fairly easy to determine whether or not the letter came from a patent troll.

What to do if confronted by a patent troll

Above all else, don’t agree to a quick settlement, especially if it seems that a patent troll is at work. A much better recommended course is to contact a patent attorney like Jeff Williams. Intellectual property attorneys have extensive experience and education that allows them to assess patent infringement claims. They can determine whether or not the infringement claims may have any merit. Moreover, they can engage in correspondence with the patent troll or their legal counsel in which in-depth analysis of the patent claims is conducted. Your patent attorney may be able to prove that your product or process in no way infringes the patent owned by the troll.

If you suspect that you are being targeted by a patent troll in Texas, contact the Law Offices of Jeff Williams. You don’t have to immediately settle, especially if the claims being made have no merit.